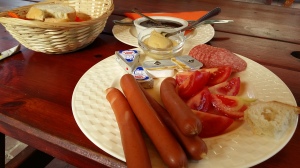 It was the second day traveling along Hungarian’s Eurovelo6 route. It was another day cycling through sun, heat, cloudless sky. The brain was boiling. The skin was burning. The team was bored. We dreamt of mountain, sea, winds.

The cycle way is built on top of the Danubedam. Which means no shadow along a 100 km distance. We stopped from time to time for coffee, pancakes, melons, grapes.

We tried to leave the Danubedam and rolled along the streets forbidden for cycles. But there was not one living soul to be seen. Only trucks moving.

The mood in the team grew frosty, as the temperature rose to 40° C, 45°C, even 50°C. We stayed the night somewhere. Ate something. Chatted with someone. Cursed the gamemaster for unfair challenge.

Reading the map we learnt flatlands will not end to soon. And weather forecast promised more heat, less clouds, and full sun.

THANKS to MISTER „Ninty miles an hour, girl, is the speed I drive“ SICKBOY!!! 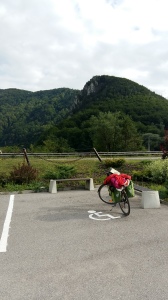