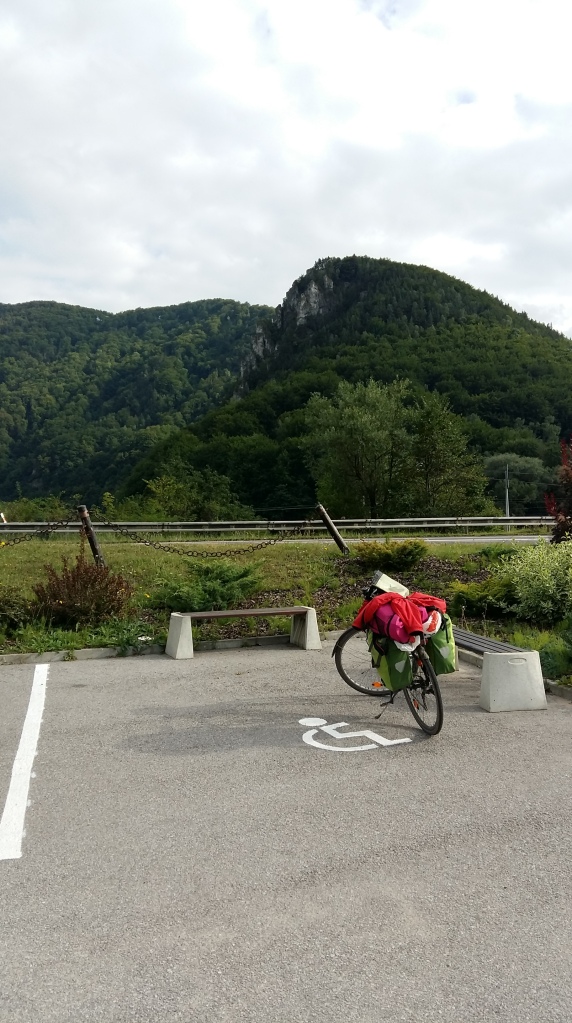 Busy day for Star Navigation Team. Every way South classified as too dangerous to cycle on. Therefore Spaceship crew is in between high spirits and bad fears.

The new challenge given by the Saint’s – Cross Slow. Rep. Mountains Traffic. And unlike online gaming Sickboy and me have both only one life to lose.

Word is out. Concentrate! Obey! Keep focused on the white line! White line is our cycling path. Drift left and Sickboy might be crashed and folded by a passing Holztransportlaster. Roll right and end in ditch with broken bones and bloody nose.

Another car from behind. One more.one more.one more. Never ending. A bus. Next a Holztransportlaster. Allways turning my head backwards when I hear them approaching. Eye contact with the driver… See me!!! Please!! I feel their engine in my stomage while they passing.

I once raced with a Holztransportlaster in Poland. Down the street green light was on. Both of us raced to be first. But there lay a narrow curve ahead only one of us could pass same time.

He played this unfair. A chain was hanging from his trailer. Swinging back and forward with a massive hook on both ends. Bones, bags, head and cycle were collected out of the ditch after I woke up.

One by one as close as ten or twenty centimetre left of my left hand.

Every single truck powered by a 10000 horse power engine, allowing him to carry a tiny forrest’s bodys uphill and downhill with top speed.

Later… Things became cool. Saints let us to a wide open alley. Holztransportlaster chose the Autobahn to carry their burden around. We had a shiny new asphalted road for our own.

THANKS to MISTER „Ninty miles an hour, girl, is the speed I drive“ SICKBOY!!! My old Shipmate.